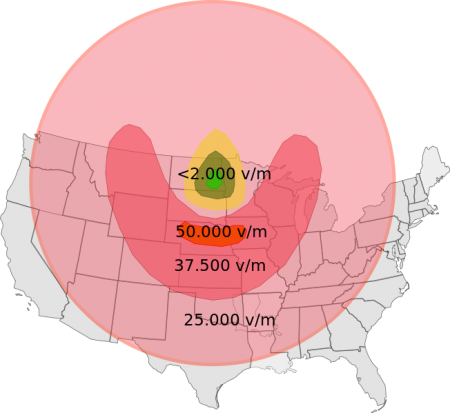 If the federal government is so concerned about the threat of terrorism, then why is it doing so little to protect our most critical infrastructure?  The control freaks in charge of our “national security” seem to be absolutely obsessed with watching us and taking away our liberties and freedoms, but meanwhile they are leaving many of the most important potential targets virtually unguarded.  It is almost as if they are not even concerned that terrorists might attack them.  For example, as you will see below, not a single one of our 104 commercial nuclear reactors would be able to handle a “maximum credible terrorist attack”.  The federal government also refuses to spend the money necessary to protect our electrical grid from being fried by a massive EMP blast even though the earth had a “near miss” just a few weeks ago.  And the Obama administration continues to leave the U.S. border with Mexico completely wide open even though it has been heavily documented that Hezbollah and other terror organizations are extremely active in Mexico.  The federal government needs to quit spending so much money listening to our phone calls and feeling us up at our airports and they need to start spending money on the security matters that will really make a difference in the long run.

So why isn’t the federal government doing anything about this?

At the National Council of State Legislatures last week in Atlanta, a number of lawmakers said they’re preparing legislation similar to a bill introduced in Maine recently did under the leadership of Rep. Andrea Boland.

Efforts are under way to press the membership of the NCSL to address the EMP issue, since the federal government has failed to take action to mitigate the potential for a catastrophic event, whether natural or man-made. An EMP event could knock out the U.S. electrical grid system and the critical infrastructures that rely on it.

Along with the national electrical grid, other critical infrastructures include telecommunications, banking and financial transactions, oil and natural gas pipelines, transportation, food and water delivery, emergency services and space systems.

In short, an EMP event could cause the collapse of society.

A massive EMP burst that fries our electrical grid could be caused by terrorists or it could come directly from our sun.  In either event, the consequences could potentially be absolutely nightmarish.  The following is a short excerpt from one of my previous articles…

Without any electrical power whatsoever, society would descend into chaos quite rapidly.  An article by Mac Slavo detailed some of the things that we could expect in the immediate aftermath of a massive EMP blast…

And remember, the earth nearly missed one of these civilization-crippling EMP blasts just a couple of weeks ago.

You would think that would have caused someone in Washington D.C. to wake up.

But it didn’t.  The federal government still seems absolutely unconcerned about the EMP threat.

In addition to all of the thieves, rapists, murderers, drug dealers and gang members that are freely hopping across the border, Hezbollah and other international terror organizations have free access to the United States because of our “open border” policy.

Most Americans don’t realize this, but Hezbollah is extremely active down in Mexico.  The following is from one of my previous articles…

But instead of securing the border, the Obama administration is doing all that it can to encourage even more illegal immigration.

This is an absolute disgrace.  The federal government should not be asking the American people to make a single sacrifice in the name of “national security” until they get their act together and start protecting our most critical infrastructure.

If terrorists do hit us, they are probably going to hit us where they can do the most damage.  And when that occurs, we are all going to pay the price for the gross negligence of our federal government.