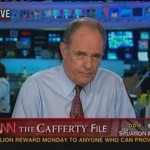 During the first year after Barack Obama was elected, there were times when CNN could have been renamed ONN – “The Obama News Network”. There were literally days when it seemed like it was just praise and worship of Barack Obama 24 hours a day.

My oh my how all of that has changed.

You know things are bad for Obama when even CNN calls him a liar. Of course it is just Jack Cafferty, but still – for a CNN personality to openly call Barack Obama a liar is just stunning.

But that is exactly what happened recently. Check it out….